The fears of arbers have not gone away in 2022 either. Everything is the same: “arbs are dead”, “what if the bookmaker bans you?”, “what if the topic dies?”. Therefore, strategies that differ from the standard ones and do not allow bookmakers to "calculate" the surebet are always popular. Some are born and die, but arbs express have proven their viability. Today we will talk about how to link surebets with parlays and how such a link works.

Important: calculations and strategy screens were made for the Russian-language version of the site in rubles. If you work with another currency, you need to select the one you want in the scanner calculator.

The answer to the question "What is a surebets express?" may seem obvious: these are accumulators, according to the results of which we get a plus, regardless of how the sporting events end. But this is not entirely true ... or rather, not at all. To better understand how it all works, let's first dwell on the very idea of ​​accumulator bet insurance.

The average bettor (not an surebettor) loses money in a bookmaker's on margin. Therefore, throughout the existence of beeches, players came up with various “win-win” betting strategies. Express insurance is one of them.

It arose after players became disillusioned with strategies such as Martingale and d'Alembert, which are usually called "catch-up" in the world of sports betting. How they work:

Such strategies differ, in a dignified way, only in how the bet increases - in arithmetic or geometric progression. They came to us from roulette, where they were used on red/black bets (hence the bets on an equal line). The problem is that they only stretch the loss in time, and do not allow you to win. Adherents of these strategies take advantage of the fact that people do not really delve into the mathematics of the process.

The chance to reach such a level of catch-up that the bet becomes unbearable is quite small. But bookmakers won't let you do it – the bet size is always limited. Therefore, literally after 5-6 steps you will hit the ceiling and the strategy loses its meaning.

After the majority realized this truth (although there are still enough players using catch-up), there were "gurus" who offered "improvement" - express insurance. The essence of the method:

The calculation is that even if the six stages of the catch-up do not play, the express will play and there will be a profit. But there is no profit here.

We will not bore the reader with detailed mathematical calculations, especially since this will lead us away from the topic of the article. But we offer the most inquisitive to do it on their own: you will see that such a "strategy" is untenable from the point of view of mathematics.

You are probably wondering now: why are we telling all this for so long if the whole strategy leads to a loss? But we have not yet touched on one important factor – the connection of express and surebets. After all, so far we have been discussing coefficients that already have a "minus" in the form of a bookmaker's margin (1-93-1,99). But what if it's a surebet with coeff/ 2.1 and 2.1? More on this later.

It's time to finish with the theory and move on to practice: a visual example will make it more clear how the method works. To begin with, let's take a simple and understandable example . In reality, you won't encounter this, but it makes it easier to understand how everything works.

Seaching surebets. It is better to do this with a scanner – it saves a lot of time and simplifies the process. You can see the description of the most reliable programs in this article on our website.

We are interested in two surebets that give two (no more) bookmakers. Important condition: matches should not overlap in time. Ideally, if they follow each other. Let's assume that we have found such two arbs:

The total amount of the bet that we are going to make is 10,000 rubles. (5000 rubles for each). Let's take a look at what the calculator shows us if we act in a standard way.

To calculate, we will use the BreakingBet calculator, which, in addition to standard functions, offers multicurrency, a rate converter, commission accounting and much more. 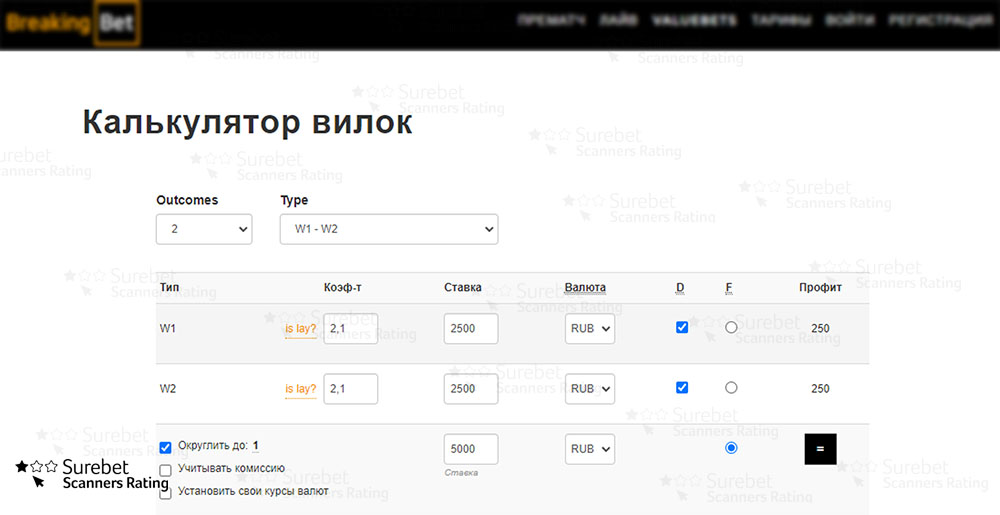 Total 250 rubles profit from each event, total profit 500 rubles - remember this figure. We proceed to overlap the event with express.

Express 1 is put down in the bookmaker that is the donor of the surebet. If you still don't know what it is and how to use it, check out our article on this topic here. So far, let's briefly say that this is an bookie, the coefficient in which can change quickly. Let's assume that in our case this is BM 1.

After the express has already been put down in the donor, we move on to the second bookmaker and the second express: W2 W4 coeff 4.41. The amount is the same – 2500 rubles.

You've probably already noticed that we don't cover all the "arms" with these two express, but of course we can't put a press from the events of different bookies. Therefore, we add 2 ordinaries to our express for the first event:

We wait until the first match is over and analyze the result.

Accordingly, if team 2 had won the first match, then the profit from the ordinary, which we put on team 4, would have to be put on team 3 in BM 1.

We are waiting for the end of the second match.

Now we remember how much we would have received with a standard draw of these surebets: 500 rubles. It turns out that when surebetting with express, we increase our profit more than twice – a huge figure.

At first, you can use a simpler method, until you hone your skills and get used to quickly calculating express bets. It differs in that only one express is used here. Let's look at an example. Let's take the same situation as in the "full version" for clarity of comparison:

As in the previous example, we put the first express from the donor:

Further, the differences begin, so from now on, be more careful.

Instead of the second accumulator, we close the second shoulder of the first surebet with an ordinary in the second office: W2 with a coefficient of 2.1. Rate 2500 rub.

We are waiting for the result of the first match. If you played an ordinary, then we fix the profit of 250 rubles. If the first match came from the accumulator, then we close the second arm of the second match in the second bookie (sorry for the tautology). W4 bet with a coefficient of 2.1 in the amount of 5250 rubles. Why exactly so many? Because we are playing against the odds of the entire parlay, not just the second match. We get the following picture in the calculator: 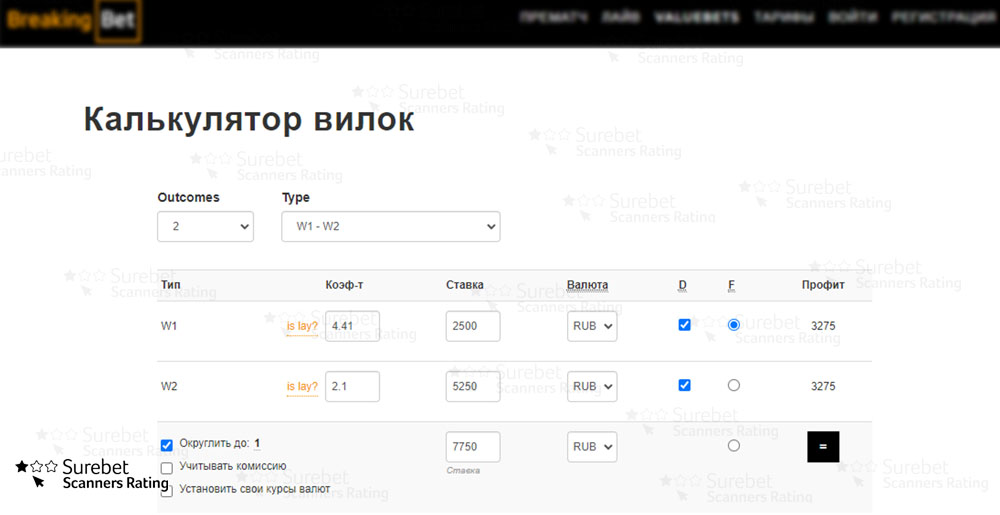 We get the final profit of 3275 rubles. But from this amount you need to subtract the bet on the first ordinary - 2500 rubles. Total we get 775 rubles.

As you can see, this method is much more profitable than the one described above, but it brings more than just closing the surebet with singles and at the same time is somewhat simpler than the two-press method.

Let's take a look at a real-life example with real odds to make sure that the system works not only in cases where situations are close to ideal.

The conditions are met: the second match starts much later, both surebets are in two identical bookmakers (1XBet and Parimatch). Plus, in the first match there is an obvious donor, he is also the initiator - this is 1XBet. So let's start. We allocate 10,000 rubles for these surebets.

We put the first express from the donor - 1XBet. It will consist of the following events (both football):

The final press coefficient is 12.99.

We bet on the first express 2506 rubles.

We put the second express in Parimatch from the following events:

In the example, approximately equal coefficients were obtained, but this, of course, will not always be the case. Just follow the procedure and the calculator will tell you the bet sizes.

We put ordinaries on the first match. Those. these are the stakes:

The amounts have already been calculated in the previous steps, so just drive them into the coupon.

We are waiting for the result of the Australian A-League match.

If the result is Toyal Under, then we bet the winnings (5612 rubles) on West Ham - Norwich X2 with a coefficient of 5.8.

Those. we overlap the last arm of the surebet, as we did in the example. It remains to wait for the inevitable profit.

Express on surebets from three or more outcomes

Once you understand the principle of the technique, it will not be difficult for you to bet on three or more events. It’s just that in these cases you will have to reinsure more shoulders: after each match, put a single on the outcome that was in the lost accumulator. But only a simplified method will work on such surebets, because. there are options to lose both parlays after the second event.

And there are more nuances. Firstly, it is difficult to find three matches at once, which will have surebets in two bookies. In fairness, we note that on weekends at the height of the season this is, of course, not uncommon. Secondly (and most importantly), there are much more risks that the surebet will disappear before you have time to cover all the shoulders and put down all the parlays. Thirdly, even if you do everything in time, the odds of subsequent matches can change dramatically until the previous ones are over.

Therefore, arb parlays with three or more events are a risk. If you see such matches, then it would be reasonable to combine them into two pools of two surebets. And do not forget about the complexity of the calculations themselves of such outcomes. Without sufficient experience in arb betting, it is better not to start betting on events with three or more outcomes.

Pros of the arb express method

Summing up about surebets express

So is it worth it to surebetting at all? Yes, it's worth it. But at the same time, you need to understand that it is unlikely that you will be able to earn money exclusively on them due to the rarity of the situations themselves and the complexity of the process. But as an additional way to increase your profit from surebets, this is a great option.