Surebets (arbitrage situations) are one of the best strategies for making money in sports betting. You do not need to thoroughly understand the competition, study statistics and do analytics. It is enough to know the mechanism of bets, be able to make calculations and quickly make a bet. Arbitration situations arise in any sport, but most often players work with football, since it is moderately dynamic, and there are always a lot of matches. Not surprisingly, beginners are advised to start with it.

The second most popular rate is always tennis. And for good reason. Firstly, tennis is a beautiful sport!

and if we return to the topic of our site, then....

The following advantages of surebetting in tennis can be distinguished:

In no case do we urge you to switch exclusively to tennis. We just wanted to mention some advantages.

How to start surebetting in tennis

From a technical point of view, there is nothing complicated here. Choose the bookmaker  to your liking and the surebet scanner that suits you - for this we recommend that you use our rating of scanners.

There is no doubt about their honesty and speed. We strongly recommend not to waste time on free scanners, of which there are also many. Firstly, they are inconvenient and have limited functionality, and secondly, there are too many erroneous events in them.

Any professional bettor will tell you that it is much better and more profitable to bet on surebets in Live mode. In addition, it is more difficult for bookmakers to track arbitrage situations. However, for beginners it is better not to rush: first you need to fill your hand in the prematch mode.

In general, at the beginning of the activity, it is best not to use a lot of money for bets and start place bets in bookies that you plan to abandon in the future. That is, sacrifice them for the sake of your education. You take the conditional 100 euro and put them on the sly in the prematch, it's not scary even to lose everything, it's normal during training. The main thing is that this money does not become a financial disaster for you.

Got experience - smoothly switch to Live mode. Still, there are more surebets, and they are much more profitable. It is important to take into account that everything needs to be done quickly, since tennis is a dynamic sport, the coefficients here change after each serve. Therefore, start working only after making sure that you quickly and well learned how to make a bet.

What are the best outcomes for betting on tennis? 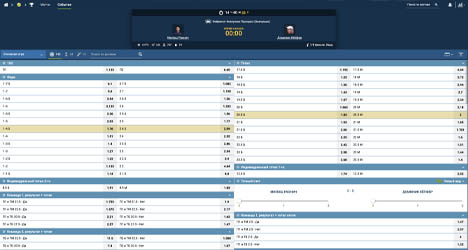 Arbs on tennis are formed on almost any outcome that bookmakers offer. But there are basic options that should be used in the first place:

These three markets should be sufficient. Also, in different bookmakers there may be bets on statistics (who commits more aces, more mistakes, and the like). However, be careful with them, the bookmaker is quickly blocked for such bets.

You also need to be careful when betting on winning games. One rally can take just a couple of seconds, and you simply won't have time to close your shoulder. You need to resort to them only when you already have a lot of experience.

Men's and women's tennis: what is the difference

In general, men are more resilient and are not so clearly influenced by external factors: rain, strong wind, heat, and the like.

Women are physically weaker, they have less muscle mass and total body weight, so women's tennis has the following features:

There is no consensus among experts who is more technical - men or women. The most correct point of view would be to accept the fact that technicality does not depend on gender, but on the athlete, his talent.

For surebets, both men's and women's tennis are suitable. Let's just note that the matches with the participation of women are shorter. If it is important for you to place your bets as quickly and as much as possible, choose women . But men have many more surebets within the same set and game, this will allow them to cover more arbitrage rates.

Tennis competitions are singles and doubles. And here it is necessary to understand how they differ from each other. First let's look at the difference in the rules:

Doubles is less spectacular than singles. And the main reason for this is the frivolous attitude of tennis players: most often they play not for the sake of victory, but for pleasure. A couple of star singles can easily lose to little-known athletes.

Doubles matches are faster because of the rules that we have given above. Tennis arbs are also formed here, and you can take them, but there are not so many of them, since bookmakers do not favor these competitions and do not give an extensive line.

As already mentioned above, in the line of bookmakers, you can almost always find several dozen tennis matches. But are they all suitable for surebetting  Let's look at it in order.

The most prestigious competitions, including four events in a calendar year:

Winning here is considered a great achievement for any tennis player, and winning all tournaments is a unique achievement. Competitions take place throughout the year with an interval of several months, and they are ideal for betting on arbs. Bookmakers describe matches in great detail, and some give unique markets. A large number of arbitration situations are formed.

Held since 1900, it is considered the second most prestigious competition in the world. National teams from different countries of the world are fighting for the silver "salad bowl", the strongest athletes always participate. The Cup is played once a year, tennis players meet both in singles and doubles. Only men compete, an analogue is provided for women — the Federation Cup.

The Davis Cup is one of the best options for tennis surebetting. Bookmakers roll out a wide line, and each of them usually has its own opinion about the outcome of the game. Therefore, you can earn good money here.

The ATP and WTA organize a large number of tournaments during the calendar year. Should I use them all for tennis arbs? Yes, it's worth it. Because they are the ones who provide most of the betting on surebets during the breaks of the Grand Slam and Davis Cup. Avoid only the smallest tournaments where little-known tennis players play, bets on them may not attract the necessary attention of bookmakers.

They are held every four years, and tennis has been part of their program since 1988. Traditionally, competitions attract a huge number of sports betting players. The disadvantage of the Olympic Games is that they are rarely held. In the year of their holding, we strongly recommend playing tennis arbs: due to the large number of bets, it is difficult to calculate the surebettors

They can be organized by the tennis federation, individuals, governments of countries, sports communities. They do not attract much attention from the world, no one tries to play for victory in them. You can bet on surebets, but very carefully, as bookmakers quickly calculate arbs due to the unpopularity of these tournaments among ordinary bettor.

The coverage of courts on tennis courts is different, and they have a significant impact on the outcome of the match. There are four types:

Every tennis player is considered strong on a certain surface. Roger Federer has no equal on grass, but he is weak on the ground, and Rafael Nadal is the opposite. It is not surprising that athletes achieve great success on a particular court, while on others they perform very mediocre.

Rules of safety in surebetting

Obviously, surebetting does not avoid the bookmaker's sanctions in the form of maximum cuts. The only question is how fast it will happen. Arbitration situations on tennis are no exception, for them the BM can also block the account. Therefore, it is important to adhere to the safety rules:

Tennis arbs are a good option for betting. In conclusion, we will highlight the main advantages and features. There are a lot of matches, and they practically go all year round, a break of just a couple of months happens only on New Year's Eve. So, there is no need to wait for the start of the season, as in football or hockey. The dynamism of matches allows you to flirt with several surebets within the same game, in football, for example, it is almost impossible.

It is very important not to rush straight into Live and catch arbs for games, this is the right way to drain. First you need to practice in the pre-match and use more "long" surebets, for example, to win a match or set, totals and handicaps. Also, do not openly flirt with third-rate tournaments, it is quite possible to get a cut of maximums for betting on them. And training is important, over time you will learn how to quickly issue coupons.